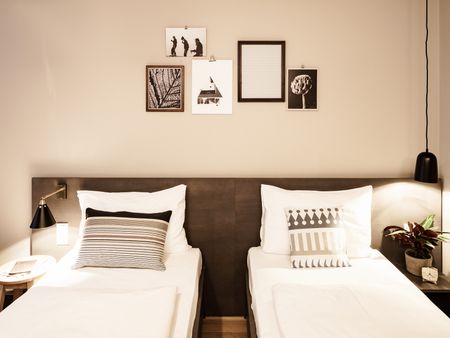 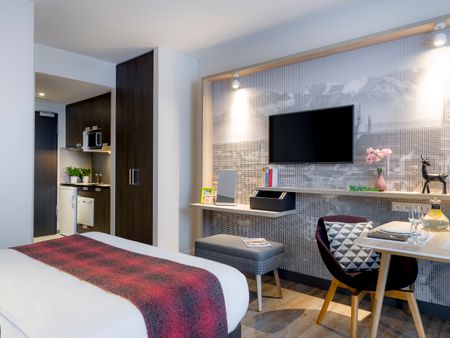 Make your home in the city known for its annual Oktoberfest celebration, centuries-old buildings, numerous museums, and beer halls with a student accommodation near the Technical University of Munich from Student.com.

We offer student housing near the Munich city centre as well as within walking distance of the TU Munich campus. You’ll live in a beautiful Bavarian city in stylish homes in harmonious and welcoming living spaces.

To learn more about a particular apartment listing we are offering, don’t hesitate to call us or send your queries through live chat on our website.

Where is TUM located?

The Technical University of Munich spans several large sites in the Free State of Bavaria in southeast Germany. The main campus is in Munich, with additional campuses in Garching, Freising, Heilbronn and Straubing.

These locations house the university’s academic faculties and its most important research facilities.

TUM is also represented internationally with locations on several continents. But the heart of TUM has been beating in the city of Munich since its founding in 1868.

The university’s presence in Munich is spread into three regional sites at Arcisstraße, Olympic Park, and the university hospitals. The institution’s main campus is home to the departments of architecture, information technology and electrical engineering, business School, and medical hospitals.

Munich is a beautiful city

Munich, München, or “Home of the Monks,” is the largest city in southern Germany and the country’s third-largest city (after Berlin and Hamburg). A city with a big heart, suave but easy-going, buzzing yet tranquil, Munich is Germany’s lifestyle capital.

If you appreciate the finer things in life, Ludwigstrasse and Maximilianstrasse, two of the city’s four royal avenues, provide some of the city’s grandest luxury shopping. Almost all international luxury labels of the fashion and jewellery industries are available for purchase in these major thoroughfares.

But a trip to one of the country’s most beautiful squares won’t cost you a penny. Marienplatz is at the heart of the city and home to the old and new town halls. The world-famous Glockenspiel in Rathaus (New City Hall) is as much a part of the city’s identity as the Hofbräuhaus beer hall or green dome-crested towers of the iconic Church of Our Lady.

The city also boasts natural beauty. The English Garden, Munich’s very own slice of paradise, is a large public park in the centre of Munich that is wedged in between the Isar River and the city centre. From two of Munich’s most beautiful beer gardens (the Chinese Tower and the picturesque lakeside spot) to the Eisbach River, visiting one of the biggest urban parks in the world is the perfect recipe for a relaxing afternoon.

Studying at the Technical University of Munich

As one of eleven “Universities of Excellence” in Germany, Technical University of Munich (German: Technische Universität München) is one of the most renowned technical universities in the world.

One of the first three “Universities of Excellence” in Germany, Technical University of Munich (TUM) is the only technical university in the country to secure the title for the third time in succession (2006, 2012, and 2019). It is also a member of TU9, an integrated society of the most distinguished and prestigious German institutes of technology.

The university has been consistently ranked among the top 50 universities worldwide, placing 38th in the Times Higher Education (THE) and 50th in the QS 2022 World University Rankings, respectively. It is also one of the most reputable, ranking 45th in THE’s 2021 World Reputation Rankings.

Among Europe’s most outstanding universities in research and innovation, TUM combines excellence in research and teaching with an entrepreneurial mindset. The university offers a combination of graduate and undergraduate programs to its almost 50,000 students that is difficult to find anywhere else in Europe.

TUM’s programs cover a unique range of disciplines, including engineering, natural sciences, life sciences, medicine, political and social sciences, and management. Its academic structure is divided into 15 departments and 13 research centres which facilitate the university’s strong emphasis on inventions and discoveries.

A hotbed of research and innovation

At the cutting edge of modern research, TUM is among Europe’s leading research-focused universities.

Research at TUM is geared towards addressing the key challenges of the future in several areas, including healthcare, nutrition, energy, and raw materials, environment and climate, information and communication, as well as mobility and infrastructure.

TUM has been at the forefront of innovation since it officially opened its doors in 1868. It ranked 4th among the European Most Innovative Universities by Reuters in 2017.

Committed to cutting-edge interdisciplinary research in the fields of science, the university has produced several inventors, including Carl von Linde, who invented the refrigerator, and Rudolf Diesel, who conceived the diesel engine.

If you choose to study at TUM, you will have the opportunity to learn from leading experts in their fields. The TUM staff is decorated with a plethora of Nobel laureates, Leibniz Prize winners, and The Institute of Electrical and Electronics Engineers (IEEE) Fellows.

Some of TUM’s innovation is powered by its distinctive entrepreneurial character.

The university prides itself on fostering a supportive environment for budding entrepreneurs. In fact, it positions itself as ‘The Entrepreneurial University’ with a mission statement that reads: “We invest in talents. Recognition is our return.” And based on its ambitious investments in its own talent, it’s hard to object.

TUM supports university graduates/researchers who have promising ideas for high-tech start-ups by providing business advice and preparing them for the challenges of entrepreneurship. This has led to more than 800 start-ups being developed by students and staff at the institution.

TUM attracts scientists and students from every corner of the globe, with 30% of its student population being international. Its strong collaboration with various global corporations and other academic institutions around the world makes for an international environment.

The university has over 150 international partnerships with various firms in Europe, the United States, Asia, and Australia. It has collaborated with renowned companies such as BMW, Audi, and Siemens. It has also partnered with several universities, including Stanford University, Singapore Nanyang Technological University, and the University of Melbourne.

TUM is also a partner with LACTOSE, an international network for senior lecturers and students among the best Asian and European universities, as well as the Top Industrial Managers for Europe (TIME network).

At the Technical University of Munich, there is more to life than lectures and exams.

With the university actively encouraging character-building activities and engagement, there is a lot to get involved with on campus for students. There are a variety of ways for them to immerse themselves in campus life from festivals, projects, initiatives, clubs, and student bodies.

TUM’s various student bodies represent the interests of students and also play a major role in shaping life on campus from politics to events.

Each summer TUNIX at Munich’s Königsplatz, GARNIX at the Garching campus, and StuStaCulum at the Studentenstadt gives TUM students a chance to enjoy the buzz of young bands performing, ice-cold beer, and sizzling barbecues.

Some of the initiatives at TUM help students campaign for human rights, participate in volunteer projects such as coaching young people, as well as promote on-campus intercultural exchange.

TU Film Club screens a new movie most weeks during the school term showing everything from blockbusters to low-budget masterpieces to all-time classics at the historic Carl-von-Linde lecture theatre.

The Olympic Park, built for the 1972 Summer Olympic Games, now home to the University Sports Centre, is a fantastic home for the largest sporting program at a German university.

With 15,000 members, the University Sports Centre (ZHS) is the largest university sports community in Germany. It brings together students from every university in Munich and has something for athletes, activity junkies, to occasional gym-goers from aerobics, climbing, beach volleyball, to yoga.

Munich and its environs are a dream-come-true for sports enthusiasts, and ZHS makes great use of the city’s beautiful surrounding countryside.

Windsurfers and sailors can enjoy the windy conditions on Lake Starnberg, and the Bavarian Alps are within easy distance for climbers, hikers, skiers, and snowboarders.

History of Technical University of Munich

The Technical University of Munich, originally known as the Polytechnische Schule München (Polytechnic School of Munich), was founded in 1868 to provide the state of Bavaria with a centre of learning dedicated to the natural sciences.

It had its premises at Arcisstraße, where it is still located today.

In 1877, the Polytechnische Schule München became the Technische Hochschule München or TH München. Fourteen years later, it was granted the right to award doctorates.

After the Bavarian government started to allow women to study at technical universities in the German Empire, Anna Boyksen became the first female student to enrol in electrical engineering in 1906. Martha Schneider-Bürger then became the first German female civil engineer to graduate from the university in 1927.

During World War II, 80% of the university’s facilities in Munich were destroyed. Teaching resumed in April 1946 after the war.

Ten years later, the Garching campus started operation with the construction of a research reactor. The physics department building opened there in 1969 followed by new buildings for the chemistry, biology, and geoscience departments eight years later.

In 1970, the TH München was renamed Technische Universität München or The Technical University of Munich, or TUM, as it is known today.

In 2002, in cooperation with the Nanyang Technological University and the National University of Singapore, TUM Asia was founded in Singapore, the first time a German university established a subsidiary abroad.

How can I book student housing near TUM?

Booking student housing near TUM is straightforward on Student.com. Our robust search and location features help you to compare properties based on budget, amenities, and location. Once you’ve spotted the property you want to book, click on the ‘View rooms’ button to go to the property page and see the different room types available in that property.

On the property page you’ll need to choose the room type and the dates you want. Once you’ve chosen, click ‘Enquire’ or ‘Book Now’ to begin the booking process. One of our booking consultants will then be in touch with you, answer any questions you may have and take you through the next steps of the booking process.

Why should I book private accommodation instead of university dorms?

Booking private accommodation provides several benefits. You can choose more freely where in Munich you want to live, whether it’s right in the city centre, next to your campus or in some other area of the city you like.

You also have more freedom to choose the type of room you’d like to live in, whether you want to share some facilities or have a fully self-contained apartment just for yourself.

What are the different room types you offer near TU Munich?

Private Rooms offer a private bedroom just for you. Depending on the property, your bathroom may be either private or shared. Other facilities are shared with other students.

An Entire Place offers a fully private property. You’ll have your own bedroom, bathroom and kitchenette and won’t have to share any of these facilities with anybody else.