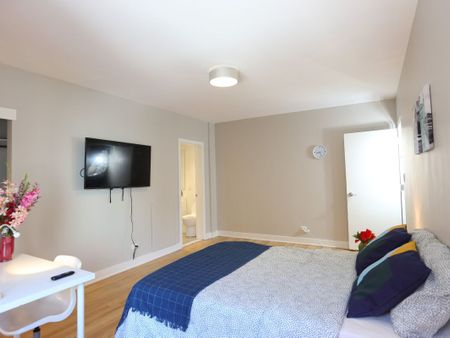 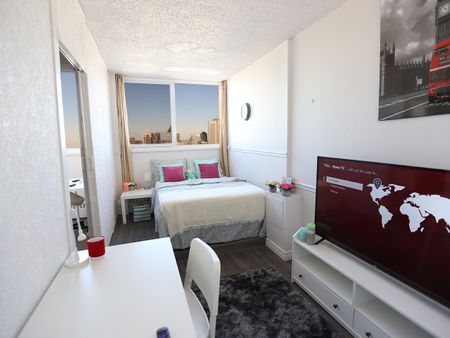 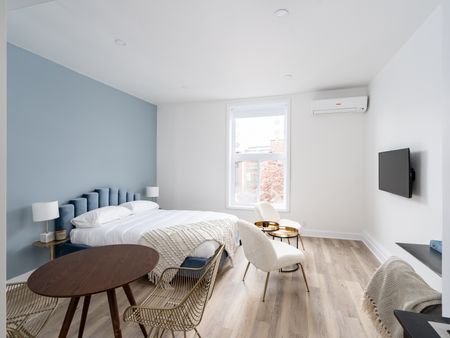 The Lonely Planet travel guide includes Montreal in its happiest places in the world to live.

We at Student.com know how finding convenient, affordable, and well-equipped off-campus housing without much hassle can make students happy.

So, we have made it easy for you to find quality student accommodation near McGill University that will allow you to enjoy a lot of what this metropolitan city has in store.

If you need further information, use the live chat tool on the bottom right-hand corner of this page to send us a quick message, or just simply give us a call. Our booking consultants are always happy to help!

Where is McGill University located?

Both of McGill University’s campuses are located on the island of Montreal in the Canadian province of Quebec.

The Downtown Campus is located in the heart of the city, while the Macdonald Campus, home to the Faculty of Agricultural and Environmental Sciences, is located just 30 minutes away in the picturesque town of Sainte-Anne-de-Bellevue.

The campus occupies a unique location between downtown Montréal and Mount Royal Park, bridging these urban and natural landscapes.

Established in 1829, the campus has a long history, which makes the downtown campus one of the single largest collections of heritage buildings in the province of Quebec outside Old Montréal and Quebec City.

In contrast to the downtown campus’s urban setting, the Macdonald Campus consists of 650 hectares of land in Sainte-Anne-de-Bellevue on the western tip of the island. On the largest private landholding in the region, the campus is home to over 70 buildings and over seven miles of road network.

Though not the actual capital, Montreal is often considered the “cultural capital of Canada.”

Located in the southwest of the province of Quebec, it is a cosmopolitan celebration of Québécois style.

It is the largest city in the province and with a metropolitan population of just over four million, the second largest in Canada, after Toronto.

Montreal is a multicultural French-Canadian city

The sole official language of Montreal is French. Over half the population speak French at home, while just under 20 percent of the population have English as their home language. Street signs and public notices are posted in French, so it will help to learn at least some French before arriving.

While Montreal is the second-largest French-speaking city in the developed world, after Paris, there are still some areas where English is the mother tongue of the majority. This is thanks to the city’s multiculturalism and ethnic diversity.

This cultural diversity is reflected in its various neighbourhoods. The French-Canadian city also features its own Chinatown, Little Italy, Little Portugal, and various other neighbourhoods adopted by immigrants as their own. These enclaves give Montreal a taste of the world through food, culture, and music.

McGill is a public university that is recognized around the world for teaching excellence and quality research programs.

McGill’s eleven faculties and eleven schools cover various subject areas from law, to music and religious studies. One of Canada’s best-known institutions of higher learning is also one of the highest-ranked.

McGill ranked 27th and 44th in the 2022 QS and Times Higher Education World University Rankings respectively, the second highest Canadian university behind the University of Toronto.

It has also been the best Medical-Doctoral University in Canada for over 15 consecutive years.

A tradition of success

With six Nobel Prize winners among its alumni, McGill has a long tradition of innovation.

The university was involved in the invention of the artificial blood cell and Plexiglas.

Among the finest research-intensive universities in the world, today McGill’s professors are helping to drive human achievement in several fields including building the new field of epigenetics and developing alternative energy sources from crop plants.

The best and the brightest

One of the primary reasons McGill is one of the leading universities in the world is its commitment to attracting and fostering some of the brightest students.

Home to the best and brightest across North America, as well as from other countries in the world, McGill students have the highest average entering grades in Canada.

The institution has helped its students win more national and international awards on average than their peers at any other Canadian university. It has a nation-leading 145 Rhodes Scholars.

McGill University is a place of academic excellence, but it does not believe it has to come at the expense of a well-rounded university experience. It encourages its students to exercise more than just their minds.

With five Residential Dining Halls and over 20 on-campus food locations, you will have many opportunities to refuel during study breaks. Enjoy fresh, home-cooked, nutritious meals with a focus on local and fresh ingredients. You can also choose from tasty vegan, vegetarian, and gluten-free options every day.

You’ll also have a wealth of opportunities to get engaged with university-affiliated programs on campus and become a part of communities, stay active, meet new friends, and discover talents you never knew you had.

Each of the university’s faculties has their own association that represents all students in the Faculty or School.

These associations are governed by student executives who are elected by members of their faculty. They provide services and create events for their members.

Student groups represent a significant part of the operations and programming of the Students’ Society of McGill University (SSMU).

With over 250 clubs, 17 student-run services, and 11 Independent Student Groups, the SSMU has a lot to offer.

SSMU’s clubs, which are groups representing a wide variety of hobbies, interests and causes fall into ten different categories, including Community Outreach and Volunteering Clubs, Networking and Leadership Development Clubs, Health and Wellness Clubs, and Athletic and Recreational Sports Clubs.

You’ll be able to see all of what SSMU Clubs, services, Independent Student Groups, and community groups have to offer at ‘Activities Night’, a bi-annual fair.

With over two hundred years of history, McGill is the oldest university in Montreal. It was founded in 1821.

Eight years after it was founded, “McGill College” began holding classes in conjunction with the Montréal Medical Institution. In 1833, McGill awarded its first degree, which was Canada’s first-ever medical degree.

Women started attending classes at McGill in 1884. This was made possible by benefactor Donald A. Smith (later Lord Strathcona). To honour him, McGill’s female students were known for decades as “Donaldas.” Female students at McGill would go on to make landmark contributions in many fields.

McGill’s Institute of Islamic Studies, the first such institution in North America, was established in 1952.

In 1965, psychologist Ronald Melzack introduced the McGill Pain Questionnaire, for many years the world’s most widely used tool for evaluating pain in patients.

How can I book student apartments near McGill University on Student.com?

Book student apartments near McGill University on Student.com by using our convenient filters and mapping tool that will allow you to compare properties by things like price and location and make it easier to find the right student home just for you.

Once you’ve found a property you like, go to the property page by clicking ‘View rooms’. On the property page, choose your preferred room type and click ‘Enquire’ or ‘Book Now’. We will contact you thereafter to answer any questions you may still have and guide you through the next steps.

Why should I book off-campus housing instead of McGill University dorms?

Booking off-campus housing provides several benefits. You’ll be able to choose freely where in the city you want to live in, whether that’s right next to campus, in the city centre, or any other area of Montreal that you like.

You’ll also be able to choose the room type that best suits your needs, whether you want to share with others, or live by yourself.

Many modern PBSAs (purpose-built student accommodations) also have great amenities that they offer their inhabitants. These properties are modern and comfortable and will let you enjoy the best possible student experience.

What are the different types of university rentals you offer near McGill University?

We offer three different types of rooms in Montreal:

Shared Room: This is a rental where you’ll share a bedroom with a roommate. Other facilities are also shared.

Private Room: In this option you’ll have your own private bedroom. Depending on the property, the bathroom might be private or shared. Other facilities are shared with other students.

Entire Place: This is a rental that gives you complete privacy where you won’t have to share any living facilities with anyone. You’ll have your own bedroom, bathroom and a kitchenette for cooking meals.

Yes, in most of the properties we list in Montreal, all bills are included. Make sure you check on the property page if this is the case with the property you’re thinking of booking though, as some landlords have different policies.

Most of the student properties we list in Montreal are rented fully furnished. Again, check the property page to make sure this is the case with the property you’re thinking of renting though.