We use cookies to improve your experience. By continuing, you agree to our use of cookies. See our Cookie Policy .
Columbia University
Try to select your university?
Move inMove out
Student Accommodation BuildingShared living in a managed building with onsite teams and shared facilitiesStudent HousingPrivate or shared living in a house, apartment, hotel or homestay
Shared RoomEnjoy the communal feeling of a shared room, which sleeps two or more in separate beds.Private RoomNo need to share in a private room, your sleep/study space is your own.Entire PlaceRelax in the privacy of a fully self-contained property.
No Visa No PayYour booking can be cancelled for free if the Visa application has been deniedNo Place No PayA booking can be cancelled for free if you have failed to obtain the required qualifications to get into your university of choiceCOVID-19 Cancellation PolicyA booking can be cancelled because of the ongoing COVID-19 situation
Book NowBook Now means you can book the property by paying a deposit
Special offerTurn on special offer to view properties with promotions only
428Properties
Recommended 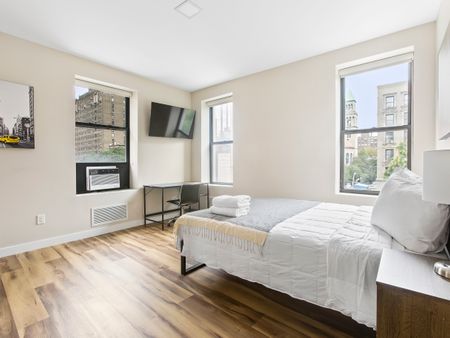 Full of hidden treasures, New York City is a super diverse metropolitan city that has something for everyone.

Make your home in this “City that Never Sleeps” with student housing from Student.com. We offer almost 100 off-campus housing options close to the iconic city’s endless entertainment and shopping. Enjoy student apartments where everything you need is right outside your door.

Our apartments near Columbia University are modern, fully furnished, and come well equipped with the necessary amenities for comfortable student living.

Want more information about our student housing? Give us a call or send us your enquiries via our website’s live chat.

Where is Columbia University located?

Nestled in a dynamic residential neighbourhood on the West Side of Upper Manhattan in New York City, Columbia University calls one of the world’s most iconic cities home.

Its main campus occupies more than six city blocks (32 acres) on Broadway in Morningside Heights, one of the safest and most convenient neighbourhoods in the borough.

The area is home to a unique constellation of prestigious buildings and landmarks, including six institutions of higher learning.

Columbia’s beautiful and walkable main campus is the geographic centre of the community, which is bordered by Central, Morningside, and Riverside Parks, as well as the Hudson River.

Plus, the rest of what the New York metropolitan area has to offer is just a short bike, bus, or subway ride away.

Columbia is within walking distance of over 10 transit lines and various bus routes. The main campus sits directly on the #1 subway line that will take you to Times Square in about 20 minutes, uptown to Columbia’s Medical Centre in 15 minutes, and to Columbia’s Baker Field Athletic Complex at the northern tip of Manhattan in 25 minutes.

Tucked away in a corner of ‘The Big Apple’, the university’s location places its students in a prime position to experience one of the world’s most iconic cities. Studying at Columbia will feel like being at the centre of everything.

Established in 1754, Columbia University is the oldest university in the state of New York and one of the oldest in the United States.

Since its founding, the private research-based university has been a leader in higher education in the country and worldwide.

A top 5 University in the U.S (2nd in 2022 US News Best Colleges Rankings) and top 20 globally (19th in 2022 QS World University Rankings), Columbia is one of the most collaborative and creative spaces to study.

The first school in the U.S. to grant the M.D. degree (doctor of medicine), it is also one of the most coveted in America.

With an undergraduate acceptance rate of 5.8 percent, next to Harvard, it’s the second most selective in the Ivy League – a selection of America’s most historically prestigious institutions of higher learning.

Columbia has two facilities outside of its Manhattan main campus: the Nevis Laboratories centre in Irvington, New York, where high-energy experimental particle and nuclear physics is studied, and the Lamont-Doherty Earth Observatory in Palisades, New York. At these locations, the university offers a comprehensive lineup of academic programs to its diverse student population of more than 30,000.

Students can choose from over 100 majors organised into 20 schools.

Columbia’s average freshman retention rate, an indicator of student satisfaction, is 98 percent. One of the main reasons for students’ contentment is the university’s student-faculty ratio of 6:1. Over 80% of its classes are conducted with less than 20 students.

A history of innovation

As the birthplace of FM radio, Columbia has carried a tradition of innovation for over 250 years.

Columbia Technology Ventures, the institution’s technology transfer office, manages more than 400 new inventions each year. It has been involved in the launching of over 150 start-up companies.

And with nine Columbia Global Centres, the university actively promotes and facilitates collaboration between its students, staff, and alumni with the objective of addressing global challenges.

With that culture of innovation and a drive for excellence, it’s no surprise that Columbia has produced numerous distinguished alumni over the years.

The university is affiliated with more than 80 Nobel Laureates, currently the second-most in the country behind Harvard. Columbia has also produced US Presidents, several Oscar winners, Supreme Court judges, and authors of the Declaration of Independence and American Constitution.

Students from all 50 US states and over 100 countries worldwide call the university home.

Home to the first Black student advocacy group on a multi-racial campus, over half of Columbia’s undergraduates are students of colour.

Columbia is home to a vibrant, curious, and welcoming community of students and faculty from every walk of life and corner of the world.

A leading institution of higher learning, it’s where dreamers, changemakers, and risk-takers dedicated to exploring new and exciting ideas come together to advance social interests.

At Columbia, you’ll get inspired by a neighbourhood and city in constant motion and a campus that is alive with opportunity.

Whatever your interests and passions are, you’ll likely find them at Columbia.

A campus fuelled by diversity and traditions

Every sphere of the Columbia experience is enriched by the university’s diverse mix of internationals who infuse their own unique culture, energy, and perspectives into the community.

Along with its long history, this full spectrum of cultures influences the university’s heavy focus on traditions.

Many campus traditions, most of which are associated with its oldest undergraduate division, Columbia College, are more than 100 years old dating back to the founding of the university.

Formed in 1894 with the purpose of raising funds for the university’s sports teams, The Varsity Show, organised by and for students, is an annual full-length musical and one of Columbia’s oldest traditions.

Celebrate the illumination of the trees lining College Walk at the campus Tree Lighting ceremony. Meet up at the sundial for free hot chocolate, performances by a cappella groups, and speeches by the university president and a guest.

And when you are about to complete your journey at Columbia, 40s on 40 is regarded as a rite of passage. Forty days before your graduation, drink some 40oz malt liquor on the steps of Low Library to commemorate your impending achievement.

The institution is also dedicated to maintaining a campus culture that values and promotes individual well-being and facilitates a healthy community.

Founded in 1754, Columbia University is the oldest institution of higher learning in the state of New York and the fifth oldest in the United States.

After being originally formed as King’s College by the royal charter of King George II of England, the first classes were held by Samuel Johnson, with eight students. They were held in a new schoolhouse adjoining Trinity Church at where is now lower Broadway in Manhattan.

Just thirteen years after its establishment, the institution became the first American medical school to grant the M.D. degree.

In 1857, it relocated from Park Place to 49th Street and Madison Avenue, where it remained for the next forty years.

During the latter half of the nineteenth century, Columbia rapidly took the shape of a modern university. This growth resulted in the formation of the Columbia School of Law in 1858, and America’s first mining school, a precursor of today’s Fu Foundation School of Engineering and Applied Science, in 1864. Then Barnard College for women (1889), the medical school (1891), followed by the Teachers College (1893), all became part of Columbia during that period.

The development of graduate faculties in the fields of pure science, political science, and philosophy established Columbia as one of the nation’s earliest centres for graduate education.

By bequest of Joseph Pulitzer, The School of Journalism was established in 1912.

As a result of a joint project between the medical school and The Presbyterian Hospital, Columbia–Presbyterian Medical Centre was officially opened in 1928. It was the first such centre to combine teaching, research, and patient care. The 1980s and early 1990s saw significant development through a wide range of infrastructural projects.

A 650-million-dollar building program, which begun in 1994, provided the impetus for the completion and renovation of several important facilities, including the Furnald Hall, the athletics facilities on campus and at Baker Field, and the construction of the Schools of Law and Business.

Following the signing of the Community Benefits Agreement in 2009, the new campus in Manhattanville took shape with the Jerome L. Greene Science Center and the Lenfest Centre opening in 2017. That was followed by the Forum a year later, and the opening of the Columbia Business School’s new facilities in January 2022.

How can I book off-campus housing near Columbia on Student.com?

It’s simple and easy to book off-campus housing near Columbia on Student.com.

When you find a property you want to book, click ‘View rooms’ to go to the property page. On the property page, choose the type of room you’d like to live in and click ‘Enquire’ or ‘Book Now’. After doing so, you’ll be asked to fill in your contact details and one of our booking consultants will soon give you a call to answer any questions you may have about the different options and help you complete the booking process.

Student.com offers three room types in New York City. Do note however, that not all room types are available in all properties.

1. Shared Rooms – two or more people sleep in separate beds in the same bedroom. Other facilities like the bathroom and kitchen are also shared with other students.

2. Private Rooms – this offers a private bedroom just for you. In some properties you’ll also get a private bathroom. Other facilities are shared.

3. Entire Place – a self-contained property with fully private living facilities. You’ll have a private bedroom, bathroom and kitchenette and won’t have to share anything with anyone. The perfect choice if you love to have a private space just for yourself!

In most of the apartments we list in NYC, all bills are included. Check on the property page if this is the case with the apartment you’re thinking of booking though.

Almost all of our listed apartments in New York City are rented fully furnished. We also list a few that are rented unfurnished though, so check the property page to see if the apartment you’re thinking of renting is rented furnished or unfurnished.

Do you offer graduate housing as well?

Yes. As long as you are a full-time student, you can book any apartment listed on our website.

Can I also book summer housing near Columbia University on Student.com?

Yes, many of the apartments we list can also be rented for the summer months as well.