We use cookies to improve your experience. By continuing, you agree to our use of cookies. See our Cookie Policy .
Select University
Try to select your university?
Move inMove out
Student Accommodation BuildingShared living in a managed building with onsite teams and shared facilitiesStudent HousingPrivate or shared living in a house, apartment, hotel or homestay
Shared RoomEnjoy the communal feeling of a shared room, which sleeps two or more in separate beds.Private RoomNo need to share in a private room, your sleep/study space is your own.Entire PlaceRelax in the privacy of a fully self-contained property.
No Visa No PayYour booking can be cancelled for free if the Visa application has been deniedNo Place No PayA booking can be cancelled for free if you have failed to obtain the required qualifications to get into your university of choiceCOVID-19 Cancellation PolicyA booking can be cancelled because of the ongoing COVID-19 situation
Book NowBook Now means you can book the property by paying a deposit
Special offerTurn on special offer to view properties with promotions only
3Properties
Recommended 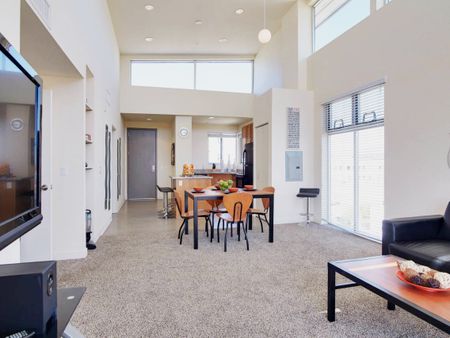 Take the guesswork out of finding off-campus housing for students in San Diego with Student.com.

Our student apartments in San Diego will allow you to live mere moments from the San Diego State University campus, surrounded by trendy bars and quirky independent eateries.

With the student housing we provide, you will make your home in the metropolis of San Diego where you can discover a wealth of trendy bars, cool clubs, and activities to keep you busy when you’re not in class.

Reach out to us on the phone or through Live Chat on the bottom right-hand corner of this page to learn more about our student accommodation in San Diego. Our booking consultants are always happy to help!

Get to know San Diego

A dry, sunny climate, beautiful beaches, fish tacos, craft beer, Comic-Con, and a park with its own zoo, are some of the well-known reasons people travel from all over the world to visit San Diego.

But this laid-back Southern California city has plenty more to offer its 35 million annual visitors. Outside of idyllic year-round weather and 70 miles of pristine beaches, San Diego serves up world-class art, architecture, a dazzling array of world-class family attractions, and an under-the-radar wine scene.

Beyond the beaches and brewpubs, San Diego has culture in spades, with hidden gems dotted across the county.

Over 100,000 people, including elite celebrities, flock to the San Diego Convention Center every July for Comic-Con International. But the city’s culture goes well beyond celebrating superheroes and superheroines.

See permanent pieces by a variety of renowned artists and the idyllic Stuart Collection at the open-air public art museum on the University of California San Diego campus.

Witness what was the biggest ship in the world (until 1955) at the USS Midway Museum, a decommissioned aircraft carrier that is home to 30 restored aircraft, and other exhibits.

Also in the downtown waterfront area, just a few blocks away, is the Maritime Museum of San Diego, where you can tour the tall-masted Star of India, the oldest active sailing ship in the world.

Historical architecture also adds to the intrigue of San Diego. For a dose of the city’s history, head west to discover historic Kensington’s Spanish-inspired architecture. Or check out the world-famous Salk Institute, one of the world’s preeminent basic research institutions, or the Cabrillo National Monument, which commemorates the first landing of the Spanish in California.

San Diego’s brewery obsession has placed it on the beer lover’s map, right next to Belgium, Germany, and the United Kingdom. The city is dotted with wineries and has more than 150 breweries with an ever-changing array of beer styles available at bars, restaurants, and tasting rooms in every corner.

While it is synonymous with craft beer, wine, kombucha, cider, and mead, the ‘SoCal’ metropolis can hold its own against any foodie destination on earth. Using ingredients from local waters, raised or grown on local farms, or carefully cultivated on lands further afield, San Diego chefs and restaurants have earned many of the highest food-world accolades.

Whether it is casual, hole-in-the-wall, classy, or hip cuisine, you’re bound to find top-notch, first-rate food of every kind wherever you look.

The Baja California peninsula, the area south of San Diego just across the border in Mexico, has a profound influence on the local cuisine. Considered the world capital of fish tacos, San Diego is loaded with other familiar Mexican staples like burritos, fajitas, and mariscos.

If you like happy hour, then you’ll love Taco Tuesdays in San Diego, when many local eateries of all types offer tempting food and drink specials.

The ‘City in Motion’ can be as wild and crazy or as calm and blissful as you like, whether you’re looking for a fun time or blissful rejuvenation.

The city’s vibrant nightlife is a draw for revellers and spring breakers, but San Diego also has lots to offers when you want to relax and enjoy nature. Living in San Diego, you’ll have a stunning coastline, the desert, and snow-capped peaks over 6,500-feet tall right on your doorstep.

After an afternoon at the beach or enjoying the many attractions San Diego has to offer, a night on the town can cap off the perfect day.

With a multitude of options for nightclubs, bars, parties, live music, and concerts, San Diego has one of the most buzzing nightlife scenes on the West Coast. Once the sun goes down, the party is on throughout the city.

The heart of San Diego’s nightlife action lies in the downtown’s lively Gaslamp Quarter that is packed with over 180 restaurants, 50 bars, and 10 nightclubs.

The 16 walkable city blocks are filled with rooftop bars, moody jazz clubs, hip nightclubs boasting celebrity DJs who turn up the volume on crowds that know how to party, and popular restaurants that spill out onto the sidewalk.

Many of the clubs have their own unique vibe with live music or stage shows that feature various types of music genres. From pop, rock, EM, hip hop, country, flamenco dance, to burlesque, you’re bound to find a spot that will keep you out of your seat and on the dance floor.

Outside of the downtown area, you’ll also find iconic rock clubs, intimate concert venues, and a host of other opportunities to get out and party in the city nicknamed the ‘Birthplace of California’.

One of them is the linear highway community of El Cajon Boulevard, of simply known as ‘The Boulevard’. This area provides a more laid-back option for nights out, whether you’re into karaoke at chill-spot bars or craft brews at hip local spots like The Ugly Dog Pub.

A high-top roof bar is one of the best places to enjoy a city with year-round beautiful weather, a glittering skyline, and breathtaking views. With a growing list of swanky rooftop bars, you will have opportunities to enjoy spectacular views of sunsets and the stars while you raise your glass and sip hand-crafted cocktails, local craft beer, and farm-fresh plates, in style.

A place for thrilling adventures

Whether you love surfing, swimming, diving, climbing, cycling, or are just seeking some adventure, San Diego is the place to be.

Famous for fun surfing all year round, San Diego’s Pacific coastline also offers opportunities to snorkel face to face with gentle leopard sharks, drop in a line on a deep-sea fishing trip, zoom around on a jet ski, kayak into sea caves, or sail on a boat.

If you’re in search of more of an adrenaline rush, take to the air with a full-ocean-view skydive in Oceanside, lift-off at the world-famous paragliding and hang gliding destination, Torrey Pines Gliderport, hit the rugged backcountry for rock climbing, or head out to the ample trails for hiking, mountain biking, and running.

For a more relaxing experience, charter a boat for a sailing lesson or a sunset cruise with a special someone. With year-round sunny weather, you won’t be short of days where you can get up close and personal with the marine mammals. Hop aboard a traditional whale-watching boat to see the whales, dolphins, seals, and sea lions.

Where to study in San Diego

The highest-ranked university in San Diego is the University of California, San Diego (UCSD). It is home to about 43,000 students.

One of the 10 campuses that makes up the state-wide University of California system, UC San Diego offers over 200 undergraduate and graduate degree programs across six different residential colleges, three graduate schools, and two professional medical schools.

Among the US Public Ivy colleges, a list of prestigious public universities in the United States, UCSD has been ranked one of the top public universities in the world. Several of the institution’s academic staff have been elected to the National Academy of Engineering, the National Academy of Sciences, the Institute of Medicine, and to the American Academy of Arts and Sciences. Along its alumni network are also 15 Nobel Laureates.

The oldest and largest higher education institution in the San Diego region has over a century of achievement in academic, research, and education service.

Initially established as a training college for elementary school teachers in 1897, San Diego State University (SDSU) has grown into a public research university that’s home to over 35,000 students.

The university particularly prides itself on the programs it offers in business, engineering, public health, and education, and it’s classified as a “research high” university by the Carnegie Foundation, spending over $100 million a year on research.

San Diego State has a broad international outlook, welcoming over 2,300 international students each year from a wide range of countries, including China, Saudi Arabia, and many European countries.

Past students from all over the world make up the university’s alumni network. Some notable members of the alumni include the CEO of Costco, Jim Sinegal, and American actors Gregory Peck and Raquel Welch.

Founded in 1949, USD is a private Roman Catholic institution that’s home to about 8,000 students. This student population can choose from over 40 baccalaureate degrees organised by seven different schools and a college:

The Division of Professional and Continuing Education provides both on-campus and online graduate degree courses and is recognised as a Community Engagement Institution by the Carnegie Foundation.

How do I apply for private, off-campus accommodation in San Diego on Student.com?

You can compare properties by things like price and location with our convenient filter feature and mapping tool on this page. After choosing your desired student property, go to the property page by clicking the ‘View rooms’ button.

On the property page you’ll need to choose your preferred room type and the dates when you’ll want to live in the property. Once you’ve made your choices, click ‘Enquire’ or ‘Book Now’. A booking consultant will be in touch with you to answer any questions you may have and take you through the next steps.

What room types do you offer?

We offer three different types of rooms in San Diego. Do note however, that not all properties we list have all three room types available.

In a Shared Room you’ll share a bedroom with a roommate. Other facilities are shared with students living in other rooms.

In a Private Room you’ll get your own private bedroom. In some private rooms, you’ll also have a private, en-suite bathroom. Other facilities are shared with other students.

If you book the Entire Place, you’ll get your own private studio property with no sharing. You’ll have your own bedroom, bathroom and cooking facilities. The perfect choice if you love your privacy!

Yes. All the apartments we list in San Diego are fully furnished.

Can I book accommodation for the summer as well?

Yes, you can rent the apartments we list in San Diego until the end of July.