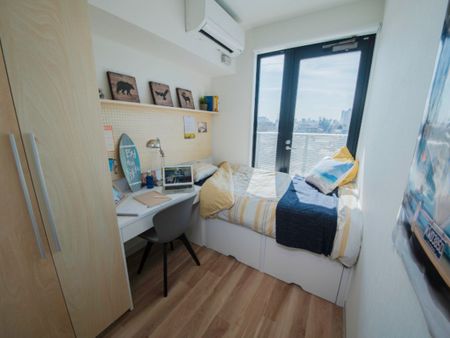 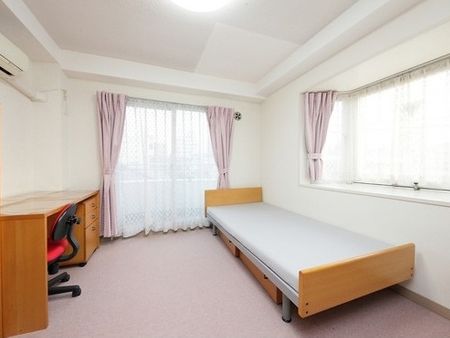 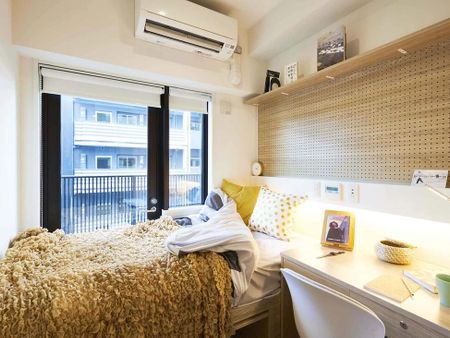 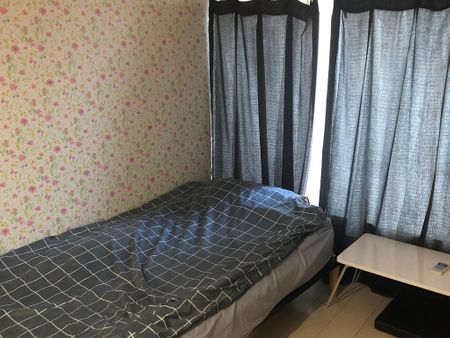 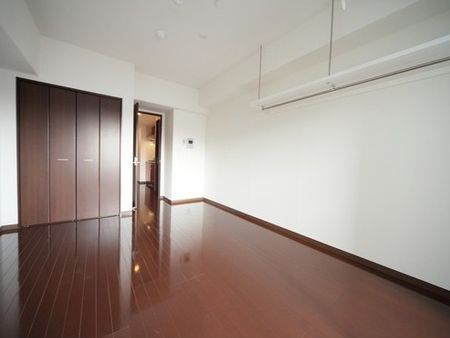 Tokyo is a vibrant metropolis with a unique culture that is ideal for growing minds and youthful adventure. Student.com will help you to easily find a home in one of the world’s most diverse cities.

Our student accommodation options in Tokyo offer affordable and convenient student apartments that come equipped with modern student amenities. We have apartments for rent that are in student-friendly neighbourhoods close to the city’s universities, attractions, and subway stations.

If you need to learn more about the student housing in Tokyo we have on offer, just call us, or send us a quick message on Live Chat.

Get to know Tokyo

Originally called ‘Edo,’ Tokyo is the capital of Japan and one of the largest cities in the world.

Tokyo has survived major fires in the Edo period, a devastating earthquake in 1923, and bombings during WWII, to become the core of Japan’s economy, politics, and culture. It is one of the leading cities in Asia for the development of economies and high-tech industries.

This extends to the higher education sector too, with the country providing an overall student experience that is in line with the best in the world.

The city of neon lights, cherry blossoms, and technology was named the second-best student city in the world in QS Best Student Cities Rankings for 2021 and 2022.

Tokyo is an international city that is full of contrasts. It is where the past meet the present, and where the ancient mixes with the modern, in harmony.

Steeped in technology and innovation, yet still deeply rooted in thousands of years of tradition and heritage, it is a city with a dynamic mix of modernity and tradition. Tokyo is where modern, state-of-the-art skyscrapers sit side-by-side with ancient temples, and where you can play with the latest tech gadgets one minute and be in awe of the sight of ancient crafts the next.

With bustling city streets, a vibrant and unique local culture, and a distinct urban character, Tokyo offers one of the most stimulating student environments in the world. This vibrant and diverse metropolis has something to offer everyone who visits, whether it’s for study, travel, or work.

A unique and welcoming culture

Technological innovation and ancient tradition are not the only things that are at the forefront of Japanese culture. The majority of Japanese locals are very polite and good-natured.

Despite its reputation of being homogenous, there is a deep-rooted culture of genuine care and respect (omotenashi) towards foreigners in Japan. You will be met with warmth and kindness from the locals in Tokyo, especially if you speak a bit of Japanese and embrace their local customs and culture.

The rich natural environments of Tokyo and the city’s distinct districts and neighbourhoods also add to the unique experience. Tokyo is not only good at balancing the old with the new, it also possesses an eclectic mix of local and foreign.

The city has become increasingly multicultural in the last 10 years, hosting approximately 550,000 foreigners, and attracting over 15 million tourists from across the world in 2019. So, you’ll never be short of people to meet or things to partake in regardless of where you are from.

Tokyo is a city on the cutting edge, and it doesn’t shy away from change. It has developed rapidly from a cultural city embedded in tradition into a city that is at the forefront of innovation.

From robots to smart cities, Tokyo is often admired for its state-of-the-art technology and has earned a strong reputation for its tech-savvy attitude. It’s a gadget paradise for those who love all things sleek, new, and technologically advanced.

A city of colour

Tokyo is not a concrete tech-crazed jungle though. It’s also a city that’s full of colour and serenity. The city has an abundance of neon lights, and many tranquil parks and pristine gardens to escape from the hustle and bustle of the city’s streets.

Tokyo not only provides a high level of education, the city is also considered the entertainment hub of Japan.

From shopping to eating out, exploring nature, hiking, bowling and sports to cinema and karaoke, Tokyo provides many options of entertainment and plenty of cultural attractions to explore when you want to take a break from your studies.

The city is home to a plethora of restaurants, many art galleries and museums, temples, shrines, shops, prestigious entertainment, and events that celebrate the city’s rich history and culture.

The Sumidagawa Fireworks Festival, whose origins can be traced all the way back to 1732 is one of the most popular fireworks festivals in the city. Held every July, the event attracted close to one million attendees in 2019.

Tokyo abounds with tourist attractions. Some of the city’s most famous are:

Karaoke is one of the most popular pastimes in Japan and you’ll have plenty of opportunities to express your inner superstar and sing your heart out in Tokyo with music venues like 1Kara, Amour Bar & Karaoke, and Glam.

Catch a film with friends in the famous and very state-of-the-art TOHO Cinema, or enjoy bowling, ping-pong, billiard, darts, roller-skating, and other indoor activities at the famous ROUND1.

For more fun activities and attractions, visit Ikebukuro, a commercial and entertainment district in Toshima that offers plenty of entertainment, museums, an aquarium, a planetarium, and an indoor amusement park.

For something different, visit Odaiba, a high-tech entertainment hub on an artificial island in Tokyo Bay, see a sumo tournament (basho), or enjoy a classical performance at a historical kabuki theatre.

If you want to deepen your understanding and appreciation of Japanese culture, head to the Roppongi District and visit the Mori Art Museum and Observatory.

A plethora of cuisines

Tokyo is home to more Michelin-starred restaurants than any other city in the world. So, food is a big part of the framework of the city.

Like its culture, the food scene in Tokyo is diverse. It’s common to find upscale cuisine establishments and inventive street food stalls sharing the same street.

You’ll also be spoilt for choice, because when it comes to food, there’s much more to Tokyo than just fresh sushi and sashimi.

The local cuisine is one of the most intriguing in the world. You’ll find some of the famous Japanese dishes including soba, tempura, and washoku in Tokyo. Enjoy Japanese street foods like the ball-shaped takoyaki, an array of delicious noodle dishes, and Japanese barbecues. As well as Japanese specialties, you’ll also find types of cuisines from all corners of the globe.

The vibrant and bustling district of Shibuya, which is very popular among young people, has a wide range of restaurants preparing all styles of food imaginable.

Tokyo’s transport system is hard to rival. If you find yourself wanting to explore more of what Tokyo and Japan have to offer during breaks from uni, you can move around in a comfortable, quick, and reliable way.

Tokyo boasts a well-developed public transportation system of trains and buses, which makes getting around the city at any time a total breeze. Its transport system is notoriously punctual, convenient, and inexpensive. Though overcrowded at times, the city’s efficient and clean subway network can get you wherever you need to be at a rapid speed.

It’s still more affordable than some of Europe’s top student destinations, such as London. There are several outlets which are reasonably priced such as supermarkets and 100-yen shops that provide daily shopping round the clock.

Furthermore, the city’s exceptionally high quality of life will likely make up for its relatively high cost of living. Tokyo’s streets are not only easy to traverse, they’re also very clean and extremely safe for locals and foreigners alike.

Where to study in Tokyo?

The education system in Japan is considered one of the best in the world, with 12 universities making it into the 2022 QS World University Rankings. Tokyo possesses some of the highest-ranking universities in the country.

The University of Tokyo

Nicknamed ‘Todai,’ the university is one of Japan’s most storied and prestigious higher education institutions. It has produced some of the country’s finest sons and daughters. The university has several distinguished alumni, including 17 Prime Ministers, 18 Nobel laureates, four Pritzker Prize laureates, five astronauts, and one Fields Medalist.

In 2011, ‘Todai’ was ranked only behind Harvard for the university with the most alumni in CEO positions at Fortune 500 companies in the world.

The university’s five campuses are located in the districts of Hongō, Komaba, Kashiwa, Shirokanedai, and Nakano. At these locations, the university has about 30,000 students enrolled in 10 faculties and 15 graduate schools.

The largest institution of higher education dedicated to science and technology in Japan is ranked 56th in QS 2022 World University Rankings.

The institution provides full degree programmes at all levels on its Ōokayama Station, Tamachi, and Suzukakedai campuses. Ōokayama, the institution’s main campus, is home to Japan’s largest science and technology library.

Tokyo Tech is known for providing long-cherished practical science and engineering education. It offers a transdisciplinary Bachelor of Engineering program in the Global Scientists and Engineers Programme (GSEP) and its international graduate programmes cater to those hoping to pursue more advanced science or engineering degrees in Japan.

Japan’s oldest private university was established in 1858. The university offers a range of degree programmes through 10 undergraduate faculties, 14 graduate schools, and 30 research centres on its six main campuses in Tokyo and Kanagawa.

How do I apply for student apartments in Tokyo?

It’s very easy to book student apartments on Student.com. With our convenient filter feature and mapping tool, you can compare properties we list by things like price and location to find your favourites.

After finding a student property you like, go to the property page by clicking ‘View rooms’. On the property page you’ll need to choose the room type you’d like, and then click ‘Enquire’ or ‘Book Now’. One of our booking consultants will contact you to answer any further questions you may have and help you to complete the booking process.

What types of rooms are available in the apartments for rent in Tokyo?

Shared Rooms – you’ll share a bedroom with at least one other person. These rooms come with a bathroom and a kitchen that are shared with other tenants from other rooms.

Private Rooms – you’ll have your own private bedroom that you don’t have to share with anyone. Depending on the property, your bathroom might be either private or shared. Other facilities are shared with other tenants from other rooms.

Entire Place – offers a fully self-contained property where you won’t have to share any living facilities with anyone. You’ll have your own bedroom, bathroom and kitchenette. This is the most common type of property we list in Tokyo.