Post-Brexit European Bookings to the UK: Keep Calm and Carry On

Over the past few weeks, there has been great uncertainty around what impact Britain’s decision to leave the EU will have on its position as a leading study abroad destination.

There’s no doubt that the results of the country’s referendum have cast a dark shadow over the university sector. Important questions remain unanswered: will Brexit have an adverse affect on international students choosing the UK for their studies? Will British students be able to study as freely across other EU countries? At this point, less than a month after the vote, it’s too early to tell what the repercussions will be.

But at Student.com, we took a look at our own data to see if there has been an immediate impact on European students booking their accommodation in the UK. What we’ve seen suggests that, for the time being, Brexit has not impacted their plans to study in the UK. In fact, comparative to the same period last year, we saw a 169% growth in European bookings to the UK.

Based on booking data from European students in the first ten days of July 2016 compared to the same period last year, we observed the following insights at Student.com:

1. The number of European students booking accommodation in the UK has more than doubled from July 2015 to July 2016 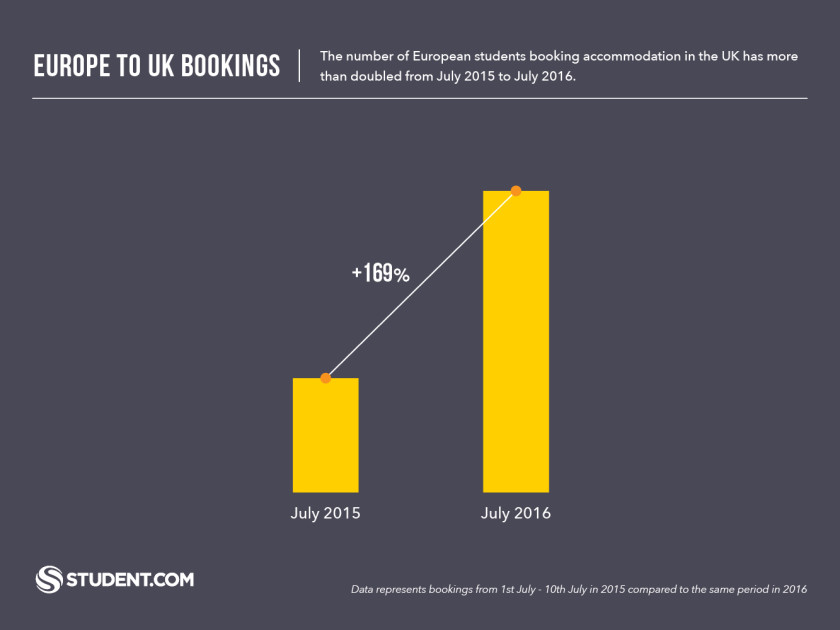 2. The number of bookings from France, Spain and Germany have doubled in July 2016 compared to July 2015, and bookings from Italy have grown by 50% 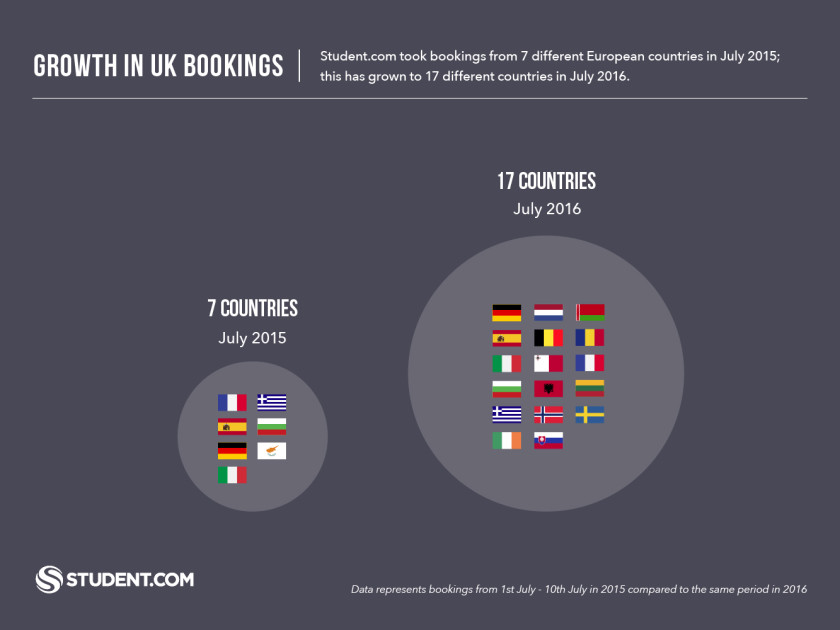 Data aside, in the few days immediately following the referendum result on the 24 June, Student.com booking teams were fielding recurrent questions from European students. Specifically, they wondered whether their application processes would change, or whether they would need visas ahead of studying in the UK.

Recently, these questions have subsided, however, uncertainty still remains as the UK welcomes a new prime minister and begins the process of leaving the EU.

On a more practical note, as the value of the pound has fluctuated, we’ve seen international students either more keen to pay rental fees ahead of time in order to take advantage of the currency climate, or hedging their bets and holding out in the hope that currency values will shift further in their favour.

It’s worth bearing in mind that a number of these students will have already gained their places at university ahead of the 24 June, as well as the fact that the numbers shown in the graphs above are against the backdrop of our business’ wider growth over the last year.

It remains to be seen how much Brexit will affect the international education industry in the UK and Europe. For now, it seems we are all adapting the rather British approach of ‘Keep Calm and Carry On’.

What Brexit Means for International Students