我們使用cookies改善你的使用經驗，若繼續前往網站，則代表你同意我們使用cookies。查看我們的 Cookie使用政策 。
University of Bradford(Emm Lane Campus)
想要選擇你的大學嗎？
入住日期退房日期
Student Accommodation BuildingShared living in a managed building with onsite teams and shared facilitiesStudent HousingPrivate or shared living in a house, apartment, hotel or homestay
共享臥房Enjoy the communal feeling of a shared room, which sleeps two or more in separate beds.私人臥房No need to share in a private room, your sleep/study space is your own.整層公寓Relax in the privacy of a fully self-contained property.
No Visa No PayYour booking can be cancelled for free if the Visa application has been deniedNo Place No PayA booking can be cancelled for free if you have failed to obtain the required qualifications to get into your university of choiceCOVID-19 Cancellation PolicyA booking can be cancelled because of the ongoing COVID-19 situation
立即訂房立即訂房代表你可以透過支付訂金來預訂房間
特別優惠Turn on special offer to view properties with promotions only
7宿舍
推薦 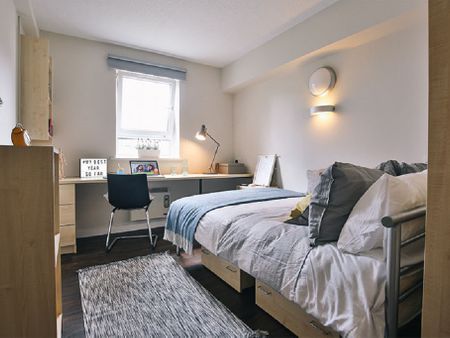 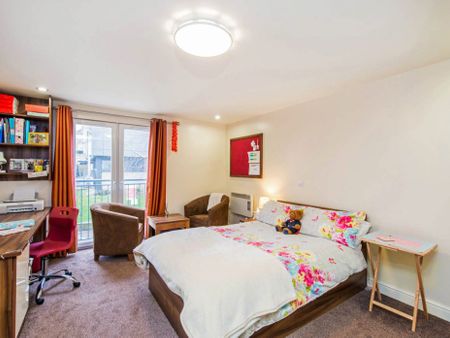 One of the gems of West Yorkshire, Bradford is a popular university city. One of the primary reasons for its popularity is its affordability. You won’t have to spend loads to make the most of student living in Bradford. Student.com will help you get good-quality and reasonably priced student accommodation Bradford.

Many of our university accommodation options put you just a few minutes from class and close to the city centre’s nightlife, thriving arts scene, restaurants and the Kirkgate Shopping Centre.

Get to know Bradford

Bradford is a city in West Yorkshire, England, that lies in the eastern foothills of the Pennines.

Although it is the sixth-largest city in the United Kingdom, it is small enough to be pleasant and laid-back, compact enough to get around easily, but large enough to have the necessary amenities of a thriving, modern city.

With its beautiful Victorian buildings and greenery, Bradford is also an aesthetically pleasing city. Cradled by the Pennine mountains, its city centre is set around a spacious green park. By night, lights surrounding the park’s 100-foot fountain illuminate the amazing gothic City Hall and iconic clock tower.

The film industry has taken advantage of Bradford’s historic architecture and beautiful scenery using the town as the backdrop for over 100 period dramas, movies and TV shows. Its history with film and the film industry dates back to the birth of cinema. It has long been acknowledged as a film-friendly city and was even recognized as UNESCO’s first ‘City of Film’.

The city has a thriving nightlife too. The streets of Little Germany are student hotspots, and you can find quirky, hipster hangouts in the North Parade area. You won’t want to miss sampling some of the tastiest curries and other great flavours in Bradford’s 200 Asian restaurants either.

A young, friendly, enterprising city of over half a million people, Bradford is a great place to live and study and an exciting place to be a student.

Bustling with a vibrant, international culture, there is a lot to see and do beyond the city centre, so whatever you are into, you will likely find it in Bradford.

A northern town sandwiched between Leeds and Manchester, Bradford might not be the first location that springs to mind when you’re thinking about having an awesome night out. However, in recent years the town has made a concerted effort to welcome visitors to its evening economy with new bars and restaurants springing up across the city.

The recent renaissance in Bradford’s nightlife has seen the opening of Sunbridgewells - an underground complex of bars, new venues on North Parade, new and refurbished bars and clubs in the centre’s West End behind the Alhambra and restaurants around The Broadway shopping centre.

What’s more, a recent survey carried out by financial service Wonga had Bradford topping a list of major cities where people can have a meal and a nice night on a budget. So, there are plenty of locations for a great night out without breaking the bank.

Flares & Reflex, which boasts two floors of a variety of music in the heart of Bradford City’s west end, offers all drinks at a generous £2.00. One of the premier nightclubs in Bradford is TRASH Bradford, which holds the popular Freshers’ Raves. City Vaults is a pub that shows a lot of live sport, hosts a number of games, plus serves food.

Whenever you feel for a more relaxed fun time, the town hosts several festivals as well.

Bradford is considered one of the curry capitals of the UK and celebrates annually with the World Curry Festival, which brings all the flavours from around the world to one place.

The Bradford Festival is a great showcase for those who want to see what the city is all about. And of course, the world’s first UNESCO City of Film has something for film buffs. Various film festivals are held in Bradford, including the annual Golden Years Film Festivals.

For those who need retail therapy, you’ll find everything you need in Bradford, from markets and boutiques to the new multi-million-pound Broadway shopping centre.

Bradford also has plenty to offer the sporting mad with its massive sporting culture. Its passion for sports is mainly represented through its highly successful Rugby League team, the Bradford Bulls.

And if all of what Bradford has to offer is not enough for you, you’re just a short trip away from some fantastic locations. Bradford is located right in the centre of the UK and possesses excellent road and rail links plus an international airport.

Leeds is around 20 minutes away by train, while Manchester can be reached in around an hour.

The University of Bradford can trace its origins back to the establishment of the town’s Mechanics Institute in 1832. It officially became the UK’s 40th university in 1966 when it received its university status by royal charter. Now the university has around 10,000 students from about 150 countries across the world.

The University of Bradford is ranked among the top 10 UK universities for several subjects in the 2021 Complete University Guide’s subject tables including physiotherapy, occupational therapy, optometry, ophthalmology & orthoptics and forensic science, and also in the top 10 in the UK for chemical engineering on the 2021 Guardian University League Tables.

The university is divided into four faculties:

The university’s academic faculty has also been at the forefront of innovation in developing an innovative new blood test for cancer. It was also awarded the Queen’s Anniversary Prize for Higher Education for its work in helping people with dementia.

Overall, the University has a welcoming, friendly atmosphere in a close-knit, vibrant environment that international students will find a home away from home.

Bradford College offers a range of full and part-time courses from introductory level through to postgraduate level to approximately 25,000 students. These students vary from school leavers, adults wanting to return to education, degree-level students to those seeking professional qualifications.

With about 170 full and part-time HE courses validated by Teesside University, Bradford College is one of the Further Education (FE) Colleges with the largest Higher Education (HE) provisions in England.

How can I book student accommodation in Bradford on Student.com?

Booking student accommodation in Bradford is simple with Student.com. After selecting the property of your choice, click “View rooms”. This will take you to the property page where you can choose your preferred room type.

After selecting the type of room you’d like to live in, click “Enquire” or “Book Now.” You’ll then be asked to leave your contact details so that one of our booking consultants can call you to answer any questions you may have and take you through the next steps of the booking process.

Why should I live in private accommodation instead of university halls?

Living in private accommodation gives you great freedom in choosing your own accommodation. You can choose to live right next to your university or right in the city centre. You can also decide whether you’d like to share your room with flatmates or live by yourself in a studio apartment.

We currently offer three different types of rooms for student accommodation on Student.com.

A Shared Room has two or more people sharing the same bedroom and sharing other living spaces with occupants of other rooms.

A Private Room has one person living in a bedroom all to themselves. Depending on the property, your bedroom might be private or shared. Other living spaces are shared with tenants from other rooms.

In an Entire Place, the bedroom, bathroom and kitchenette will be just for one person. This is a fully self-contained studio property, so no need to share anything with anyone.

Can I see the student housing before moving in?

Yes, if you’ll be in Bradford before your move in date, you can contact our booking consultants and they will gladly arrange a viewing for you.

Many of the properties we list have an excellent selection of photos and videos available on the property pages though, so even if you can’t book a viewing, you’ll still get a good idea of what your new home will look like.

Do I have to pay a deposit to secure my booking?

Yes, this is required by most UK landlords. You’ll pay the deposit directly to the landlord and won’t have to pay anything to Student.com.