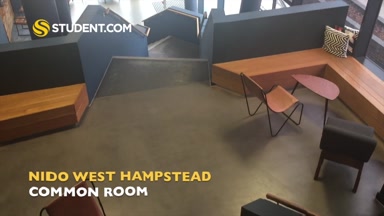 View all photos
Student.com GuaranteeGet a full refund and cancel for free if you don't get your place at University or your visa to study abroadFree cancellation or changes if you are impacted by the ongoing COVID19 pandemicMore details
From £241 /week
This property offers a 'Book Now' option.
4.3(15 reviews)
Popular!

975 students saved this property to their wishlist

ESCP Students need to contact their school directly and cannot book through student.com

unable to enter the UK due to UK travel restrictions;

or your University switched to 100% e-learning for Semester 1.

Arriving after 90 days? We’re here for you.

No place or visa? Don’t Pay!

Has your course changed to online learning for semester 1, 2, 3 or maybe even all 3?

Not to worry, you will not be liable for any charges against your licence fees.

To be eligible for this policy you need to inform us in writing by the 17th August 2020 latest.

Ch***a
Imperial College London
5.0
Oct/13/2017
租金包括水电费和网费，位置也很好，离Kings Cross地铁站只有5分钟步程。房子大小、配备、活动都很棒！
Translate to English (US)
Helpful
Ki*****ey
City, University of London
5.0
Oct/12/2017
位置很棒，附近公共交通非常发达。对我而言，这不仅仅是一个公寓，更为自己提供了一个学习和放松的良好环境。这里一整年都会举办各种各样的活动，可以借此放松自己，认识很多新朋友。
Translate to English (US)
Helpful
c**o
5.0
Dec/03/2016
This is a great property and really fit for me.
Translate to English (US)
Helpful
1 people found this helpful.
Co***r
Other
5.0
Jul/03/2016
I've been with Nido West Hampstead two years now and am planning to stay for the final year of my degree. My stay with the student accommodation has been beyond my expectations. Facilities are of the highest order and the service is always with a smile, the team love their jobs and have created a unique family atmosphere away from home. From the Gym, to the events, to the rooms, the facilities are fantastic and with the building being in such a great location, pretty much any of London's landmarks are reached within 20mins. I'd highly recommend Nido to any student looking to stay within London
Helpful
As***y
5.0
Jan/06/2015
Round the corner from the tube on a good line. You've got Finchley Road just there, massive supermarket round the corner. It's just generally a good place to live, I think
Helpful
Ch****e
5.0
Jan/06/2015
The people here do a lot to help us and they're always there on hand whenever there's any problems. Everyone here's really friendly. There's been no problems since I came and lived here. Everything is here. There's so many things going on. There's going to be more things going on next year with the new marketing team. Come and live year because it's going to be sick, the next few years. They're redoing the whole gym and everything and they're building things here and expanding, and it's going to be really big. There's going to be a lot more events going on.
Helpful
S***j
5.0
Jan/06/2015
... was good, but now they've changed so many rules that I don't really like it anymore. For example, the staff used to take out the bins once a day, and now they've said that we have to do it ourselves. It's not a big thing but it's just that it makes our life as students easier. It's not really far from central London. If you take the Jubilee line it's 10 minutes to Baker Street. Most of the universities are in central London so it's nothing to worry about. Even coming home late at night like one o'clock in the morning the streets are pretty lit up, there's always cars here and things like that, so it's pretty safe
Helpful
So***e
5.0
Jan/06/2015
... they tend to fix it straightaway. That's it really.
Helpful
1 people found this helpful.
钧*
ucl
4.0
Dec/01/2018
公寓设施齐全，但门口地铁站会比较吵
Translate to English (US)
Helpful
1 people found this helpful.
Co***r
4.0
Jan/06/2015
We have the gym downstairs. The kitchen and living room area space is quite good.
Helpful
1 people found this helpful.