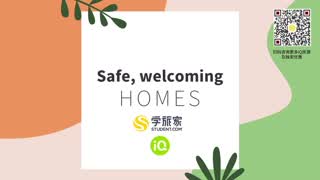 View all photos
Student.com GuaranteeGet a full refund and cancel for free if you don't get your place at University or your visa to study abroadFree cancellation or changes if you are impacted by the ongoing COVID19 pandemicMore details
From £322 /week
This property offers a 'Book Now' option.
4.4(36 reviews)
Popular!

657 students saved this property to their wishlist

Cut through the centre of Hammersmith towards the Thames, then walk or cycle along this truly beautiful stretch of the river all the way to Chiswick and beyond. As a local living at iQ Hammersmith, you can even join a rowing or sailing club to get out on the water. Stop off at any of the riverside pubs or cafés for a relaxed bite if you want to save your energy. There’s no need to head into the city for your evening’s entertainment with musicals, live comedy and concerts on offer every night in Hammersmith’s major venues.

At iQ, you’ll be living on the actual site of the old Hammersmith Palais. For almost a century this iconic venue played host to some of the biggest names in music, from The Beatles to U2.

With the Hammersmith Underground station a two-minute walk away, getting to know the city will be a breeze. Any one of the four tube lines will have you in central London and its many colleges in under 20 minutes. You can stroll to LAMDA and Imperial College London (Charing Cross campus) in a little over 10 minutes. UAL (Lime Grove) is also just up the road, in neighbouring Shepherd’s Bush.

The design of the building pays homage to the area’s roots, with famous musicians adorning walls throughout the interior. Hanging comic book covers and Union Jack couches are some of the modern, artistic touches. There are long, comfortable couches to catch up with a mate, a foosball table for a competitive time out and even a piano if you’re talented, or game enough to show off your skills!

Studios boast deluxe ensuite bathrooms, a kitchenette, Wi-Fi and underfloor heating so you’ll have no trouble staying warm on some of those chilly London nights.

A huge courtyard gives plenty of space to sneak in some study in the sun on a warm day and a cinema on the premises could be just the tonic to give yourself a break from the books.

Onsite maintenance and 24-hour security also give you that added peace of mind.

When it comes time for some rest and relaxation away from home, grab a spot by the Thames and watch the rowing boats glide by over a pint or a cup of English Breakfast tea.

Choose your room in iQ Hammersmith

- In terms of our cancellation policies, these remain and cover the eventuality allowing a full refund if travel bans and visas are not permitted. We are also very keen to ensure that the current circumstances do not deter students from booking their accommodation - or unsettle those who have already booked - for the 2020/21 academic year.

- We confirm that the protection under our current cancellation policy covers extenuating circumstances – including being unable to travel and illness. In these circumstances, students who have booked for the 2020/21 academic year - or may wish to book - are eligible to cancel their booking at any time and iQ will also fully refund any fees paid.

• you notify us of your intention to cancel within 7 days of payment of your Booking Fee.

• Your UK Visa application has been denied.

• You have failed to obtain the required qualifications to get into your first University of choice.

Where proof is provided in accordance with these terms and conditions and to our reasonable satisfaction, you will be entitled to cancel the booking and you will not be liable for the contractual obligations laid out in the Tenancy Agreement from the date of cancellation.