We use cookies to improve your experience. By continuing, you agree to our use of cookies. See our Cookie Policy .
Select University
Try to select your university?
Move inMove out
Student Accommodation BuildingShared living in a managed building with onsite teams and shared facilitiesStudent HousingPrivate or shared living in a house, apartment, hotel or homestay
Shared RoomEnjoy the communal feeling of a shared room, which sleeps two or more in separate beds.Private RoomNo need to share in a private room, your sleep/study space is your own.Entire PlaceRelax in the privacy of a fully self-contained property.
No Visa No PayYour booking can be cancelled for free if the Visa application has been deniedNo Place No PayA booking can be cancelled for free if you have failed to obtain the required qualifications to get into your university of choiceCOVID-19 Cancellation PolicyA booking can be cancelled because of the ongoing COVID-19 situation
Book NowBook Now means you can book the property by paying a deposit
Special offerTurn on special offer to view properties with promotions only
2Properties
Recommended 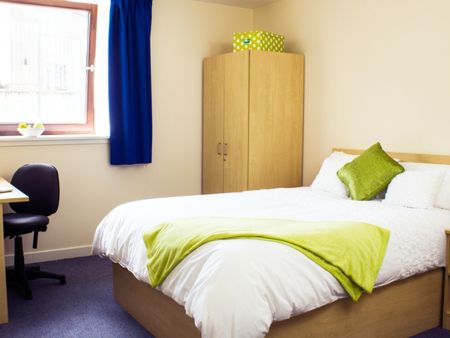 To help you make the most of the ‘coolest little city in the UK’, our student accommodation options in Dundee are conveniently located within walking distance of the city centre.

The student flats we list on Student.com are within quick and easy access to the city’s train station, the Overgate shopping centre as well as many pubs, clubs, and eateries.

What makes it even better, the uni accommodations we list are all from trusted landlords and come with modern amenities. Don’t hesitate to give us a call or message us on live chat if you need further information. Our booking consultants are always happy to answer your questions!

Get to know Dundee

In a conversation about the most exciting places to live and study in Scotland more popular places like Edinburgh, Glasgow and Aberdeen will likely be mentioned. But Dundee, though not being as big a city with non-stop buzz, deserves to be in the conversation.

Due to the city’s turbulent past, Dundee tends to be viewed by some, who are not in the know, as a bit of a run-down ghost town with very little to do. But it’s far from that. In fact, GQ Magazine recently described it as "Britain’s coolest little city." Scotland's fourth-largest city has a small and close-knit community of about 150,000 that’s renowned for its courteousness. Its small size and warm culture make it both affordable and safe to live in.

Its ongoing developments have also impressed several travel writers, publications, and websites. Slum clearance has removed many of Dundee’s old streets, courtyards, and buildings. Only a few historic buildings and one town gate (the East Port) remain in the now mostly modern glass-and-concrete city centre.

Named an autonomous county burgh in 1894, Dundee has transformed from its fascinating industrial past. Once a world centre for jute manufacturing and textile industrialization in the 19th century, it’s now a prominent educational and research and development centre.

But that’s just one reason why Dundee has been named a must-visit Scottish destination by international travel bibles such as Lonely Planet, National Geographic, and Conde Nast Traveller. This coastal city has a lot to offer visitors.

Dundee is at the heart of a very beautiful region known as Tay Country. Situated on the Tay estuary, the Waterfront City is Scotland's sunniest city with the purest air quality and mildest climate in the region. It’s also exceptionally green with more green space per head of population than anywhere in the UK.

Head across the Tay to Fife and you’ll be greeted with the stunning forest and beach of the beautiful Tentsmuir National Nature Reserve where you can feast your eyes on red squirrels in the trees and majestic sea eagles in the skies.

A climb up Balgay Hill to the Mills Observatory will reward you with a view of the stars. You can also opt for panoramic views of the River Tay and beyond by taking a hike up to the Law – the extinct volcanic plug which towers above the city.

Dundee is a UNESCO City of Design and home to Scotland’s first design museum, and the only Victoria & Albert museum in the UK outside of London. Opened in 2018, the award-winning, extraordinarily futuristic V&A Dundee museum is part of the £1 billion Waterfront project.

You'll also find the major cultural centres of Dundee Contemporary Arts and the Dundee Rep Theatre, as well as the McManus Galleries, the RRS Discovery (the ship built in 1901 for Captain Scott who travelled to the Antarctic), Dundee Science Centre, Transport Museum, the sailing frigate HMS Unicorn and much more.

Great location and a convenient size

Situated on the east coast, it’s at the heart of Scotland's road and rail network making it easy and affordable to reach the main centres of the UK and Europe.

Its small size is also ideal for creating a walkable city centre where you won’t need transportation to get around the town, unlike in most other cities.

Dundee is also known as Scotland’s student city with around 12,000 students in full-time higher education. The city’s sparkling art and design scene is not the only thing that’s cool in ‘Britain’s coolest little city.’ Dundee offers many great attractions for you to explore while you’re not in class or cramming for an exam.

The Waterfront City has a burgeoning food and drink scene with a wave of new contemporary restaurants, cafés, cool coffee houses, and eateries opening from all over the world offering Indian, Italian, Chinese and other cuisines from all over the world. You’ll have lots of choices when it comes to grabbing a bite to eat including plenty of cheap and student-friendly spots.

If you’re the ‘come to life at night’ type you’ll have plenty of opportunities to do so. Most people who have never been to Dundee think it doesn’t come alive at night. But with ‘secret’ speakeasy bars, traditional Scottish pubs, nightclubs, theatres, live music, and comedy, the city offers a fantastic night out.

The perennial student favourite Duke’s Corner has a booming live music scene. The contemporary club Underground has an eclectic playlist and plays until 3am on Friday and Saturday nights.

Also, the Phoenix, the Speedwell Bar, and the George Orwell are some of the West End’s cosy, laid-back, traditional pubs with a great selection of drinks and a friendly Scottish welcome.

There are two universities in Dundee. Other higher educational institutions include Dundee International College, which is in partnership with the University of Dundee.

The University of Dundee dates back to 1881 and gained independent university status in 1967. It’s ranked 354th in the world in the QS 2023 World University Rankings and has also gained a 5-star rating from QS.

Many of the university’s facilities are highly modern, thanks to a recent £255 million redevelopment program.

Formerly known as the University of Abertay Dundee, the university is home to 4,000 students with over 15% coming from countries outside Europe, including India, China, Malaysia, Thailand, and Pakistan.

The university’s innovative approach is clear to see in its well-designed buildings and the programmes it offers, which range from forensic, sport and food sciences to biotechnology, cybersecurity and computer games.

It’s a major hub in the booming videogames industry. It’s one of the first universities in the world to launch a computer games degree and is said to have more game developers per capita than any other university in Europe. Many students have gone on to work for the very biggest names in the gaming industry including Rockstar Games, 4J Studios, Ubisoft, Rocksteady, and Naughty Dog.

The globally popular Grand Theft Auto originated in Dundee and was created by an Abertay alumnus.

How do I apply for a student flat in Dundee on Student.com?

After finding a property you’d like to book, click ‘View rooms’ to go to the property page. After choosing the room type you prefer, click ‘Enquire’ or ‘Book Now.’ You’ll then be asked to leave your contact details and one of our booking consultants will get in touch with you to take you through the next steps and answer any questions you may have.

If you book a Shared Room, you’ll be sharing a bedroom with at least one other person, as well as other facilities like the bathroom and kitchen with other tenants from other rooms.

If you book one of our Private Rooms, you’ll get a private bedroom just for yourself. The bathroom might be either private or shared depending on the property. Other facilities are shared with your fellow students.

Booking the Entire Place will give you a fully self-contained studio flat with your own bedroom, bathroom, and kitchenette. No need to share anything!

Many of the properties we list in Dundee have a very good selection of photos and videos on the property pages, so you’ll be able to get a good idea of what your new home will look like even if you don’t see it in person.

If you would prefer to see a place for yourself before booking it though, we can also arrange for you to have a viewing. Just get in touch with us and one of our booking consultants will set it up for you.

Yes, you’ll need to pay the landlord a deposit to secure the booking. Your booking consultant will give you more information about the deposit once you are ready to book.

In most properties we list in Dundee, all bills are included in the rent. This might not always be the case however, so make sure you check the property page of the place you’re interested in booking to see what bills are included there.

Are the properties fully furnished?

Usually the flats we list in Dundee are rented fully furnished. Check the property page to see if this is the case with the flat apartment you’re thinking of renting though, as some landlords might sometimes have different policies.